Pop Up Stores Are No Longer Novel

Pop Up Stores May not be Novel, but they are More Necessary Than Ever

Pop-up stores once inspired awe and surprise. The fact that a previously derelict building or an empty green area suddenly became the home to a fun and innovative – and temporary – shopping experience was thrilling and unexpected.

Now, in most metropolitan areas, people have become accustomed to seeing temporary activations appearing and quickly disappearing. Yet, just because pop-up activations lack the novelty they once held does not diminish their usefulness or effectiveness.

Let’s take a look at the evolution of the pop up and the role it plays in today’s retail environment.

The Evolution of the Pop Up

An example of how pop ups have evolved over time can be seen in the online retailer Birchbox and how it utilized live activations to help the brand grow and thrive.

The direct-to-consumer (DTC) beauty brand first began business in 2010. The brainchild of two graduates of Harvard Business School, for years, Birchbox existed exclusively as a subscription service where samples of beauty products were sent to subscribers monthly. The recipients review the products they receive so Birchbox can learn more about their likes and dislikes to prepare their subscription box better. In addition, subscribers can purchase full-size versions of products in the brand’s ecommerce shop.

“Getting samples is the easy part,” Katia Beauchamp, Co-Founder and Chief Executive Officer of Birchbox, said to Forbes. “An ecommerce site is much more challenging.”

After remaining online only for several years, Birchbox wanted to test drive the practicality of creating a physical store. It did this with pop ups, specifically by going on a “national tour” and establishing pop-up stores in several cities across the United States.

“The landscape is changing rapidly when it comes to where to have stores and what kind of stores,” Philippe Pinatel, President and Chief Operating Officer for Birchbox, said to Digiday. “In this context, pop ups and short-term leases are an interesting way to test different types of experiences and meet our community without creating an exposure to an asset that could turn out to be risky.”

The Birchbox pop ups allowed consumers to make their own beauty supply boxes, sample cosmetics at “Try Bars,” and take a break to enjoy a manicure. After the pop-up tour completed, Birchbox decided to open its first permanent location in New York City’s SoHo neighborhood. The brand replicated the tour, this time on an international stage when searching for a second location (it settled on a spot in Paris, France).

“Before our own stores, I didn’t have much retail experience other than the eight years I spent working at the Gap part-time,” Beauchamp said in an interview with Entrepreneur. “I really underestimated how impactful the people who work in stores are. They’re everything. Almost nothing else matters. If you have people who are passionate about serving a consumer, it creates incredible relationships and brings those consumers back, not necessarily to see the same person but because they had an experience that surprised them, one where they felt heard and cared for.”

Birchbox’s next step was to experiment with pop ups inside existing stores, first with pop ups inside several Gap stores and most recently with Walgreens. Birchbox opened shops in six Walgreens locations last year – three in New York City, and one in Chicago, Los Angeles, and Minneapolis – and has plans to open five shops in four cities this year (in Chicago, Dallas, Los Angeles, and Miami).

“Walgreens is where the everyday consumer is already shopping. There was alignment and excitement about how we could come together to create a really unique experience for this customer, who is never made to feel like a priority in this industry,” said Beauchamp.

“We want to contextualize every product in the store. Traditionally, beauty is merchandised by brand. When we opened our permanent Birchbox store in New York, we flipped that and organized it by product — cleanser, or mascara. Now we’re taking it a step further: Here are our cleansers, but here are the hydrating cleansers. It’s adding vertical categories to those horizontal ones.”

So, Birchbox began by utilizing pop ups as a way to test the viability of a permanent brick-and-mortar location. It then used the same approach on a broader scale when searching for a second location. The brand then expanded into other methods of pop up iterations, including its recent collaboration with Walgreens. The ecommerce brand utilized pop ups as an essential component of its growth. And it’s not alone. Other online retailers, such as Warby Parker and Bonobos, have used pop ups in a similar method when transitioning from being exclusively ecommerce. 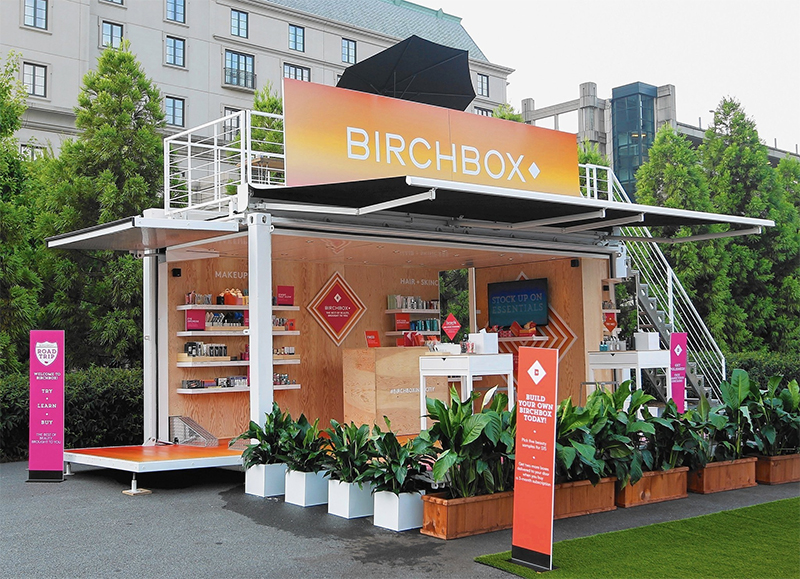 The Current Role of the Pop Up

Today, pop ups have evolved from a revenue booster into a brand builder. They are viewed as a critical aspect of a retailer’s marketing strategy.

Just a few years ago, DTC brands had social media marketing as their exclusive domain while larger, more established brands were focused on traditional forms of marketing. However, this is no longer the case. Every brand has realized the potential of social media marketing and has employed specialized strategies targeted to Twitter, Facebook, Instagram, and the rest – and that doesn’t even take into account the influencer deals they have in place.

Couple that with the fact that advertising rates for social media ads have steadily increased over the years, and what was once an affordable and roomy marketing landscape has become a potentially pricey option. Pop ups are a way to cut through the noise and competition on social media.

Additionally, the goal of most pop-up activations has changed. A few years ago, the overwhelming intent of a pop up was to produce sales. Now, however, for most brands, the goal of a pop up is not to achieve a financial return but to generate buzz, tell a brand story, and deliver a memorable experience.

“Our pop-up was profitable. But we’d still be happy if it was break even,” Sabrina Riddle, co-founder of hair-color brand Madison Reed, said to Digiday, “because there are other things that are valuable for us: We had some membership sign-ups that generate recurring revenue for us in the future, and we had brand exposure and PR promotion, for example.”

Madison Reed opened a pop-up color bar in New York City’s Flatiron district. The activation lasted for six months and convinced the retailer to give a permanent brick-and-mortar shop in the same area a shot.

However, as mentioned, the pop-up landscape is crowded, as well. That means brands need to ensure their pop ups make an impact on attendees to capture their attention and generate the conversations necessary to reach the right audience. Consumers have expectations when it comes to pop-up shops. They want to be impressed. They want to have an experience that they will remember – and be able to boast about on social media. They may even want to purchase a souvenir. As a retailer, you have to live up to consumer expectations if you have a hope of your pop-up strategy being a success.

For more thoughts on creating a successful pop-up marketing plan or for assistance conceptualizing and producing attention-grabbing pop ups, give Event Architecture a call at 972-323-9433.